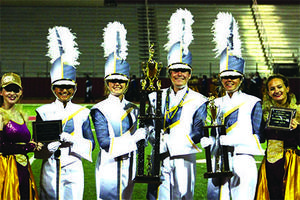 Congratulations to the Frenship High School Tiger Band on winning the Grand Champion Band award in competition this past weekend at the Texas Tumbleweed Classic Marching Contest held at Mustang Stadium in Denver City, Texas. Bands from West Texas and the Permian Basin competed in the marching contest that had one rain delay during the preliminaries.

Members of the Frenship Band also won two other major awards, Outstanding Large School Soloist and Outstanding Drum Majors. Frenship Band senior Katie Tucker was selected as Outstanding Soloist for her incredible solo performance on the oboe. Katie gave a terrific performance under a lot of pressure.  When Katie is not featured on oboe, she plays the rest of the show on a keyboard.

"It is always a challenge for instrumentalists to perform outdoor solos when the weather is marginal, such as it was on Saturday," said SoRelle, "but playing your solo on a double reed instrument such as the oboe, makes it very difficult.  Although Bassoon and Oboe are not typical marching instruments, they have found a new home as feature soloists and members of ensembles for marching bands that want to feature them and earn points from the woodwind sections."

Other members of the band such as Color Guard and twirlers are not rated in the music category, but come into major importance in the categories of artistry, movement, color, and excitement. The Frenship Color Guard has been known for years for its outstanding reputation as a champion at Regional and State levels of competition. All groups are rated on individual and ensemble marching. We are fortunate that the Frenship Band is strong in all areas of performance.

Four other FHS Band members were also honored for Outstanding Performance as a Drum major team.  Members of our team are Senior Elijah Jolley, Senior Kennzie Greenlee, Senior Taylor Moers, and Junior Chloe Smith.  This is the same drum major team that won Outstanding Team in the previous week at the West Texas Auxiliary Championships. Drum Majors are selected by audition and evaluation in the spring to be the on-field leaders of the Tiger Band. Their performance is critical as they are the link between the band directors and the band during the performance of the show. They are expected to be outstanding leaders as well as terrific conductors of the music. These fine drum majors have already excelled in all these areas.

The next performance for the Tiger Band will be at the Lubbock Westerner Festival to be held on Saturday, October 5th, at Lowrey Field in Lubbock. The Tiger Band will perform at 9:45 AM. Come and support them as they take another step toward our goal of earning our 29th consecutive UIL Sweepstakes Award. Go Tigers!