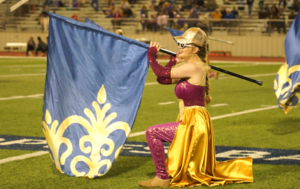 Despite her lack of sight, Scout doesn't let anything hold her back as she tackles every obstacle head-on.

If you know the name Scout Sonnenberg, you’re one of the lucky ones. This Frenship High School Junior has a way of brightening up your day with her kind words, positive attitude and her seemingly unending supply of yellow smiley face stickers that she generously hands out.

But what’s even more incredible than her vision to spread cheer, is that her lack of eyesight doesn’t stop her from anything - including her role as Captain of the Frenship High School Color Guard.

Born with Malignant Congenital Glaucoma, Scout is considered legally blind. She’s already gone through 43 surgeries and will suffer from pain and a severe light sensitivity for the rest of her life. “When I go outside it is basically white and I don’t have any depth perception,” Scout said. “My cane is basically my eyeballs.”

Besides her glittery baseball cap and sunglasses to block out the light, Scout blends in with the color guard members as the award-winning band takes the field. Once she is helped to her starting point, she trades in her cane for a flag and step-by-step goes through the choreographed routine by muscle memory. Despite her inability to see, she seamlessly tosses the large flag in the air and catches it without missing a beat; a feat even for those with impeccable vision.

“There’s nothing that stops her,” said Amanda Knight, guard director. “I mean we’ve seen her grow and we have seen her tackle every challenge just like it’s nothing. It’s really pretty awesome.”

A natural leader built with an unwavering determination, Scout’s performances landed her a spot in the upcoming Macy’s Thanksgiving Day Parade in November. She is one of only six students chosen from Texas to perform in the color guard.

“The sky is the limit for her,” said Elisha Reese, Frenship High School Assistant Principal. “She never thinks she can’t do something, and she never lets her disability hold her back. One thing I love about her is she takes it upon herself to spread happiness.”

In addition to her color guard talents, Scout is also in the top four percent of her class, a member of the National Honor Society, and an artist selected for advanced art classes.

“We told her she could do anything,” said Scout’s mother Paula. “Along the way she must have believed us.”