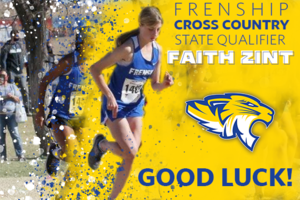 For the first time in almost twenty-five years, Frenship Cross-Country is sending a female runner to the state meet. Freshman athlete, Faith Zint, is ready for the challenge ahead in Round Rock, TX on Tuesday, November 24.

Zint said she has been running since she was a young girl. She said her parents encouraged her and her siblings to go outside and get moving.

“When I was a kid in elementary, my mom was always wanting us to get our energy out,” Zint said. “In middle school I just did track, but now that I am a Freshman in high school, I wanted to pick it back up.”

Zint said that since the beginning of the season she knew she wanted to challenge herself more and more. That is when she discovered a way to do that.

“The boys are like cars,” Zint said. “They run so fast! So, I wanted to start running with them to kind of challenge myself a little bit more.”

“I can’t believe it,” Zint said. “I am actually really shocked and excited. As a Freshman, I never thought I would be doing this.”

Leslea Verdy Underwood represented Frenship at the state meet back in 1995 and went on to run at South Plains College as a part of their National Championship team. Leslea died at age 33 from Leukemia, and the ninth anniversary of her death will be on Monday, just a day before Zint runs at this years state competition.

Zint said that her preparation for the meet is simple.

“I’m just kind of running,” Zint said with a laugh. “I am listening to my body and learning as I go.”

Zint explained that Coach Amanda Kirkpatrick is the reason she is pushing herself to do well next Tuesday. She said that Coach Kirkpatrick has been her driving force throughout the season.

“Coach Kirkpatrick isn’t like other coaches,” Zint said. “She has a softer personality and just knows when to push us and how to tell us that we are doing good. It makes us excited to know she believes in us.”

Zint said Coach Kirkpatrick was excited at the end of the Regional meet when she learned that Zint had qualified for state.

“She was giddy,” Zint said. “She was so excited – it was really sweet.”

Zint said that now her focus is to do good for Coach Kirkpatrick and for her team.

“After seeing how excited everyone was,” Zint said, “I know I have to do good.”