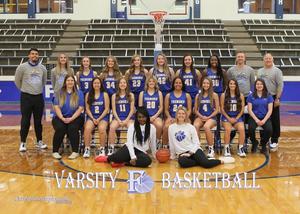 It’s an ongoing understatement to say 2020 has been a year wrought with challenges, and the Frenship Girls Basketball Team has not been immune even early in the season. In the past week, both of Frenship’s previously scheduled opponents (Amarillo High and Lubbock Coronado) have been forced to cancel games due to COVID-19 cases on their respective teams.

Head Coach Trent Hilliard and his squad have rolled with the punches and continued working towards another successful season as they’ve quickly rescheduled games.

The Tigers played a double-header on Saturday, November 14, taking down the Lubbock High Lady Westerners 69-33 in the Tiger Pit. Frenship was led offensively by Airron Gaydon, Zaria Fowler, and Desiree Jefferson who had 15, 12 ,and 11 respectively. Frenship then went across town to take on the Coronado Lady Mustangs. Stifling defense from Frenship saw them take a 36-8 lead into halftime and eventually a resounding 68-17 lead with 10 Tigers scoring led by Elena Noyola with 13 and Airron Gaydon adding 11.

On Tuesday, the Tigers were slated to head to Amarillo High to face the always tough Lady Sandies on their home court. Hilliard was able to quickly schedule a new opponent in the Lady Mustangs of Sands. While a first blush a 1A-II team may seem like too wide of a gap for a 6A team to take on, the Lady Mustangs are ranked #4 in the state by TGCA and recently punched above their weight class and took down a 4A-II Midland Greenwood squad.

Sands led often in the first half, taking a 4-point lead into halftime following a buzzer beating three-pointer from Landry Morrow, who scored 8 of her 13 points in the first half. The Tigers ultimately got rolling with a big 10-point third quarter from Elena Noyola, who finished with a team-leading 20 points. Abby Boyce also came up big for the Tigers in the fourth, scoring 6 of her 8 points when Frenship needed it the most.

Despite losing their Friday game against Coronado, Frenship already scheduled an additional game on Saturday as they will travel to Tuscola to face the Lady Indians of Jim Ned at 2:30 pm on Saturday, November 21. You can keep up with all of Frenship Girls Basketball’s action by following them on Twitter @FrenshipGBB.