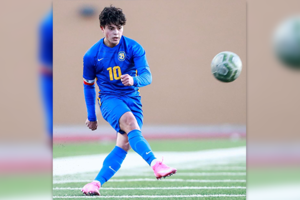 Girls head soccer coach Lauren Denning said the experience of a game instead of just a scrimmage was invaluable for her team.

“Varsity has got some tough games coming up Thursday and Friday in the Dallas area against very strong teams that will be the level that we will see deep in the playoffs,” Denning said. “I want to challenge my teams to see good teams early on in the season. It allows us to find things to work on, but also allows us to recognize the higher level that we can rise to.”

Boys head soccer coach Scott Smith said during the game against Lubbock-Cooper, he was proud of his team, even without the validation of a win.

“The team applied every single piece of what we spoke about in order t improve ourselves, and for that I am really pleased,” Smith said. “Jon Olivarez led the line and was a constant threat all game long. Kobe Gonzalez has a good eye for passing and once he and Olivarez link up more consistently, they are going to be tough to defend.”