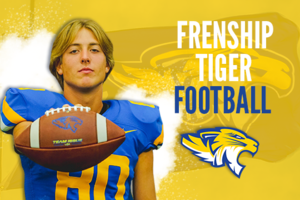 Last Friday night the Frenship Tigers faced the Odessa Permian Panthers at People’s Bank Stadium, and after getting a second wind weren’t able to clinch the win.

The game started off slow for the Tigers as they gave up seven to the Panthers right off the bat. The Tigers were digging a deeper hole allowing the Panthers the ball for all but one play of the first quarter. Permian banked 10 points before the Tigers took their second snap.

The third quarter brought to life a new Frenship team, who came back to the field ready to work. Early in the third a pass from quarterback Chad Pharries to Andrew Braddock notched the first touchdown of the game for the Tigers.

After a weather delay divided the third and fourth quarters, the Tigers were ready to come back and take home the win. Chad Pharries to Landon Hutcheson banked the second touchdown for the Tigers, bringing the score 17-14 with a little more than three minutes on the clock.

With the ball at the 35-yard line, the Tigers were hoping to set up a win, unfortunately it was too little too late, as Pharries was sacked on the fourth down. The game ended with the Panthers securing the win 17-14.

Frenship Head Football Coach Jay Northcutt said he was glad that his team stayed in it until the end, even after a rough start and weather delay.

“Proud of how our boys scratched, clawed, and fought in the second half and after the delay,” Northcutt said. “We just needed to start better.”

Now sitting at 1-1 in District 2-6A play, Northcutt and his team are focused on the future.

“We are focusing on playing clean game and starting off better on offense,” Northcutt said. “Our goal is a District Championship, but more importantly our focus is on what we do daily with our ‘Atomic Habits’ to prepare ourselves to attain those goals.” The game will be live-streamed by Frenship.TV HERE. You can also watch the game via the Frenship Athletics Facebook page HERE or with your streaming device using the Boxcast app.