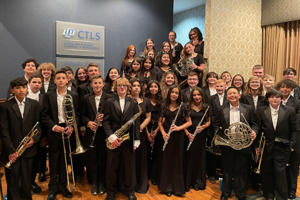 Dozens of students from all three Frenship middle schools were selected to play in one of the Region Bands.

The Region Band is a competition where all the local middle school bands from Lubbock ISD, Lubbock-Cooper ISD, Plainview ISD, and Frenship ISD, come together and participate in a performance of the same music. After the performances the students are ranked, and the top 25 percent of the students win a spot in one of three "Region Bands". Additionally, the top 4 percent of the auditioners are selected to participate with the Region Orchestra, a similar process that happens in January.

At the conclusion of the contests, Frenship is proud to announce that around one third of the students who won a spot in one of the Region Bands are from Frenship ISD and most of the band students in the Region Orchestra are from the three Frenship schools.

Terra Vista Middle School broke their record of the number of students qualifying for the Region Bands with 40 students placing in the top 25 percent. In addition, 11 of the 44 spots in the Region Orchestra are taken by Terra Vista band students.

“The way the Frenship ISD Middle School bands have been performing lately is exciting,” said Roel Sanchez, Band Director at Terra Vista Middle School. “These same kids all end up together in the high school band programs and as the saying goes, iron sharpens iron. The high school level bands are really positioned for future success when the middle schools are performing at such high levels.”

After the selection, famous conductors from all over Texas are brought in to help put together a concert in one and a half days with the new Region Bands. The bands put on their performance on the night of November 15.