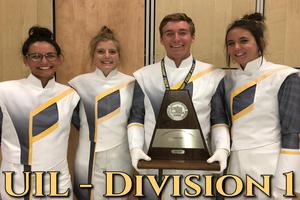 Congratulations to the Frenship High School Band on taking top honors and the Bands’ 29th Consecutive First Division in Marching award at the Region 16 UIL Marching Contest this past Saturday at Lowery Field in Lubbock.
The Tiger Band won first division placement from each judge at the contest. Judges for this marching contest came from Houston and Dallas. Since it is not a state advancement year for class 6A, this was the last marching contest of the season. It was a great season for the Tiger Band winning awards at several festivals and contests.
Pictured are Drum Majors Kennzie Greenlee, Taylor Moers, Elijah Jolley and Chloe Smith.
The FHS Band started out the day by marching in the Wolfforth Harvest Festival Parade. The almost two-block long band played and marched for a large crowd lining the streets of Wolfforth. Immediately following the parade, the band grabbed water and jumped on the buses for the ride to Lowery field to get ready for the Regional competition.
The band started out the season by winning the Grand Champion Trophy at the West Texas Auxiliary contest in Lubbock. This contest involved all of the auxiliary units from the band. This included competition for Twirlers, Color Guard, Percussion, and Drum Majors. This was the 21st consecutive time that the Tiger Band has won the WTAC Championship.
The next weekend the Tiger Band competed at the Tumbleweed Classic Marching Festival in Denver City where the band won the Outstanding overall Marching Band award in addition to several auxiliary awards.
The next Saturday took the Tiger Band to the Lubbock Westerner Festival where the band had the second-highest overall score.
The next Saturday was the Bands of America Marching contest in Midland. This is a very prestigious festival that brings in bands from the metroplex, as well as from Austin and San Antonio. The Tiger Band finished in 12th in a very tight competition.
The directors are very proud of the great effort given by members of the Tiger Band this marching season. They performed a very difficult and challenging show with an extremely high level of execution and musicianship.
The Tiger Band would like to extend our thanks to our teachers, administrators, parents, and friends of the band who have been so supportive of the Band this year. It takes a group effort to produce an award-winning band such as the Tiger Band. A special thanks to the Frenship Band Booster club, the Pit Crew and the Frenship Grill Team for always being there for the Tiger Band.
Go Tigers!
Print