Goodies and Grandparents are Good for the Soul 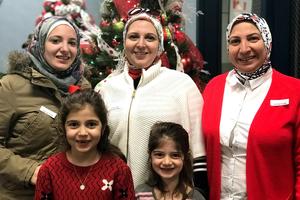 Westwind Elementary hosts a special event that allowed for very important family members to bond with their loved ones.
By Angela Howard “They are the light of my life,” was the phrase continuously heard throughout the entire room on both mornings that Westwind Elementary hosted "Goodies with Grandparents." The special event was a chance for those family members who may not be seen every day to take a glimpse into their grandchildren's school life. There were even those who had worked the entire evening and had just ended a shift but still made it out to "Goodies with Grandparents" that morning. Despite each and every circumstance, every grandparent felt that it was extremely important to be at the event to honor their grandchildren - even if it was just for a little while.

"We don't mind how long it took us to get here," said a special set of grandparents. "This is time we will cherish forever."

Each grandparent expressed what a joy it was to be a grandparent. The children beamed as they introduced their grandparents to teachers, staff and their friends. Some even teared up as they described what a special bond they had with their grandma and grandpa. The students made sure to let everyone know how important it made them feel to have their grandparents do whatever it took to come spend time with them. The Westwind PTA provided snacks and drinks for everyone to enjoy as they sat together talking, laughing and enjoying each other's company. The students were able to show their grandparents their schoolwork and then head to the library for the campus book fair.