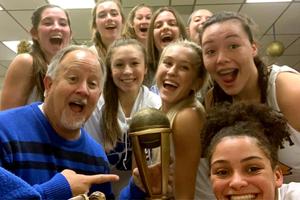 The Tigers hosted the annual Hub City Tip Off Classic and stormed through the field to win the tournament.

The Frenship Lady Tiger Basketball team got things back on track following a one-point home-opening defeat to the #1 Amarillo High Sandies two weeks ago. The Tigers hosted the annual Hub City Tip-Off Classic and stormed through the field to win the tournament. In one of the higher-profile matchups of the tournament, the Tigers took down the Lubbock Christian Lions 58-49 and were led by Ashlyn Caddell’s 5 3-pointers in the third quarter alone along with strong slashing play by Senior Guard Maci Maddox. Maddox was named the tournament MVP and extended her streak of consecutive starts past 110 games. Caddel and Kaylee Rendon were named to the All-Tournament Team as well.

A full recap of the game with Trinity can be found here on HubCityPreps.com and a full scoreboard and photo gallery of the tournament can be found HERE.

Following her efforts in the tournament, Maci Maddox was named the LoneStarVarsity Female Athlete of the Week. She becomes the sixth Tiger to take home the honor this season following Donovan Smith and Drew Hocutt representing football and Gracie Harrison, Kayton Genenbacher, and Aali Mayfield from volleyball.

The Lady Tigers defeated the Idalou Wildcats 66-35 in the Championship Game to win the Hub City Tip-Off Classic. They then traveled to Idalou to face them again on November 26 and the old adage that it’s hard to beat a team twice held true for the Tigers. They fell to Idalou 48-54 and their record now sits at 7-2 on the season. They’ll be back in action on the road on Tuesday, December 3 against Abilene Cooper before heading to the Fort Worth Cowtown Classic December 5-7.