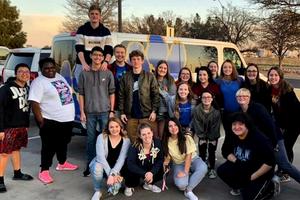 Three Frenship High School Choir Members Join the Texas All-State Choirs.
Frenship High School Choir members traveled to Midland, Texas to compete against thousands of other musicians for their chance to be selected for the All-State Ensembles. In a competition that started with more than 70,000 students across the State, 1,780 were awarded the highest honor a high school musician can receive - All-State recognition.
This competitive process begins throughout the state in auditions hosted by 33 Texas Music Educators Association Regions. Individual musicians perform selected music for a panel of judges who rank each instrument or voice part. From this ranking, a select group of musicians advances from their Region to compete against musicians from other areas in eight TMEA Area competitions. The highest-ranking musicians judged at the TMEA Area competitions qualify to perform in a TMEA All-State music group. Only the top 2.4% of musicians who initially audition become All-State musicians. Three Frenship Choir members can claim that they are in that top 2.4%. Hayleigh Stephens, Lynnli Wiseman and Mark Dannemiller were all named to the Texas All-State Choirs and will perform in San Antonio in February. Hayleigh will perform with the Mixed Choir, Lynnli with the Treble Choir, and Mark with the Tenor Bass Choir. These students were chosen for this prestigious honor through a competitive process held this year across the state at District, Region, Pre-Area, and Area levels. This is Hayleigh Stephens's third time to perform as a member of a TMEA All-State organization. This is Lynnli Wiseman and Mark Dannemiller’s first time performing as an All-State Choir member.
These students began preparing in June of this past year for this competition. They practice on their own outside of class time as well as receive intense coaching during class. Hayleigh and Lynnli also study voice with Dr. Rebecca Hays, Assistant Professor of Voice at TTU.
These students will join more than 29,000 people from Texas and around the world to attend more than 300 workshops, 100 performances, and visit over 1,400 exhibit booths at this nation’s largest music educators convention.
"I am amazed at the talent our students possess, but more so, the work ethic that each of them has exhibited throughout this process," Frenship Director of Choirs, Amy Moss, said. "The preparation for this experience is grueling and requires the students to handle a lot of feedback and intense pressure with a gracious and humble attitude. They are truly wonderful human beings. The self-discipline and commitment they have demonstrated to get to this level will carry over to whatever else they choose to do in life. I am beyond proud to know them and to be their Director."
Congratulations to these students and to the entire Frenship Choir!
Print