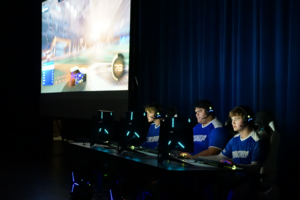 “It’s a community that a lot of these kids have wanted and now they’ve got it in a way they can be themselves and not be judged,” - Frenship Esports coach Nicholas Copeland.

Loud bursts of cheering echoed down the hallway. You could hear the excitement as students chanted the names of the players - “Atticus! Atticus! Atticus!”. A big screen illuminated the Frenship High School Lab Theater, and on the stage sat the Frenship Esports Rocket League team competing live in the state championship.

“Every time I heard someone screaming, it made me play better,” smiled Esports competitor Atticus Henry. “It was a lot of fun.”

Atticus, Christian Hansen, and Nathaniel Martinez made up the Frenship High School team and were the number one ranked Rocket League team in the state. On Thursday, in front of a crowd of students, friends, and staff members, the team went head to head with Grapevine Colleyville High School for the state championship title in Rocket League.

It wasn’t the outcome they had hoped for. While the FHS students stayed laser-focused, communicating and strategizing in front of the live audience, they fell just short of claiming the state title. Even so, the undefeated season and making it to the state championship was a testament to the students’ hard work during the program’s first year.

“What they did wasn’t easy. It wasn’t luck. It was the result of a lot of work and a lot of practice,” said FHS Esports coach Nicholas Copeland. “Their dedication and hard work showed, and I couldn’t be prouder of this team.”

Even in its first year, the program has grown in popularity with about 30 students jumping at the chance to join.  Between the teamwork, communication skills, collaboration and comradery, the program has proven to be a game-changer for the students.

“It’s a community that a lot of these kids have wanted and now they’ve got it in a way they can be themselves and not be judged,” said Copeland. “I love how amazing it is to see everyone come together. I guarantee they’re going to be lifelong friends from this.”

Copeland says he hopes people will look past the stereotypes of Esports. Just like other sports, Copeland says students are learning leadership skills, how to effectively communicate, and how to work as a cohesive group.

“People are realizing it’s more than video games. It’s scholarship opportunities and career opportunities. Some of these students can take the knowledge of the game and take it into the professional leagues,” said Copeland.

In fact, Copeland says students will visit Wayland Baptist at the end of this month to explore scholarship opportunities for the college’s Esports program.

On the heels of a successful first run, nearly 30 students are starting the spring season this week in Rocket League and League of Legends.