Lainey Cristan Commits to Play in the Big Easy 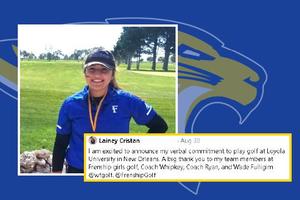 Late in the evening of Sunday, August 30, Tiger Girls golfer Lainey Cristan announced her plans to head to Loyola University in New Orleans to compete at the collegiate level as a member of the Wolf Pack.

Cristan, who was Frenship Golf’s Newcomer of the Year in the 2017-2018 season, was a contributor to the Tigers’ District 2-6A Championship effort in 2019 and had her cap set on a stellar season in 2019-2020 as well. Cristan placed in every fall and spring tournament leading up to the cancellation of the 2020 season.

"Lainey is one of the hardest working players I have ever coached,” said Frenship Girls Golf Coach Roger Whipkey. “I have no doubt she will be a great success at the collegiate level. She is not only a great golfer, she is also a great person and teammate.”

Loyola competes in the Southern States Athletics Conference as a member of the National Association of Intercollegiate Athletics (NAIA). They were ranked for 18 consecutive weeks and climbed to No. 9 in the NAIA Coaches Poll on March 6, 2020, the program’s second-highest ranking in history, prior to the cancellation of their season.