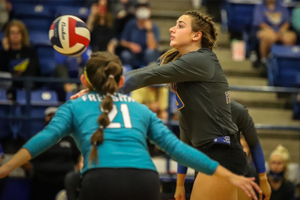 Frenship Volleyball (18-1) wrapped up their regular season on the road against Abilene High Friday, November 13, sealing an undefeated District 2-6A campaign with a 25-15, 25-12, 25-18 sweep. With the victory, Frenship extended their winning streak to 14 matches and garnered their twelfth sweep of the season, 9 of which have come in district play.

The Tigers faced the El Paso Americas Lady Trailblazers Thursday, November 19 at Pecos High School in the Bi-District round of the playoffs and took the Bi-District Championship with a 3-0 sweep of Americas. The Blazers hung with Frenship tight through the first two sets at times closing 7-point gaps down to 2 but Frenship always found a way to close it out.

Devyn Nairn led the way offensively for the Tigers with 15 kills followed closely by Addison McClure with 9 of her own. Nairn and Kayton Genenbacher each tallied 1.5 blocks and Jentre Kennedy and Madison Ramsey contributed 1 apiece as well. Genenbacher led the way in assists with 28 and chipped in 7 kills as well. The Tigers combined for 9 aces on the day with Hannah Page owning the final set with 5 aces in that frame.

The Tigers’ 25-21, 25-18, 25-9 victory was more than a Bi-District Championship, it also accounted for a new high in program history. Entering the game, Frenship had never won a playoff match since moving to 6A in the 2014-2015 school year. In four previous playoff appearances, Frenship had only won a single set in the playoffs coming in their 3-1 loss to El Paso Montwood in 2019.

Frenship will be back in action Tuesday, November 24 against the Southlake Carroll Lady Dragons at 2:00 pm at Sweetwater High School. Carroll took down Colleyville Heritage 25-17, 25-13, 25-15 last night to win their Bi-District Championship 3-0. Pending approval from the Dragons, the Area Round game vs. Carroll will be brought to you live on Frenship.TV with Keith Patrick on the call.
Source: Keith Patrick - Frenship Athletics
Published November 20, 2020 Print