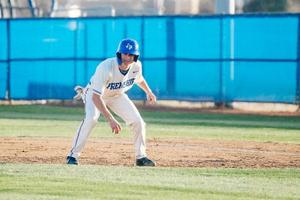 Last week the Tigers swept Odessa High and are now looking to finish off Odessa Permian as they fight to take first place in District standings.

Last Friday Frenship took on Odessa High in Odessa in the second game of the series, getting the easy win 9-2. Coldon Kiser had four runs on two triples and a homerun. Gage Cobb pitched 5 in two of three innings while striking out eight.

On Saturday, the Tigers finished off the season with a sweep, winning 13-0. Evan Johnson and Tristan Laughlin each had a pair of RBIs. Ryland Morin pitched a complete game, striking out six.

On Tuesday, the game against Odessa Permian was suspended due to weather. The Tigers will pick off where they left off on Friday, ahead 8-6, by finishing the suspended game, and then playing the second series game afterward.

Reynolds said that the first round of the playoffs will begin on May 7th and 8th.

“Right now, we are just focused on playing hard and competing at a high level,” Reynolds said.