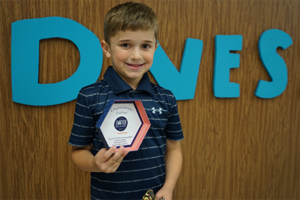 Frenship ISD’s Hudson Linnenkugel may only be in second grade, but this young filmmaker is already receiving state and national awards for his creative and artistic talents.

Each year, Hudson participates in the PTA Reflections program through his campus, Oak Ridge Elementary. This program encourages students of all ages across the nation to create and submit original artwork in seven different categories. For this year’s theme, “I Matter Because…”, Hudson created a stop motion film titled “I Matter Because I Can Do BIG Things”.

“Hudson is very small for his age and has a brittle bone issue and respiratory issues. It has kept him from doing certain things he wants to do at his age,” said Jordan Linnenkugel, Hudson’s mother. “His video talks about how you can do big things even when you’re little. There was a lot of heart in what he put out this year.”

On May 7 during a surprise announcement in front of the entire Oak Ridge Elementary second grade class, Hudson received the Texas PTA Outstanding Interpretation Award. Only one student in pre-k through grade 12 can win this award for each of the seven art categories, making Hudson the top state award winner for film production.

As the top film in the state, Hudson then advanced to the national level where he received the Award of Excellence. Less than 250 students out of more than 300,000 submissions from across the country receive an award at the national level.

As a National PTA Award of Excellence winner, Hudson will receive a $200 Young Artist Scholarship, a certificate of excellence, and his film will be featured in the traveling art exhibition.

“It’s a big accomplishment for him,” said Jordan. “We’re just really grateful for the PTA and their volunteers at the local level all the way up to the national level that allow this program to happen.”