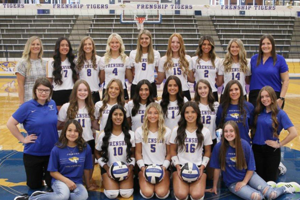 The Tigers have been dominating on the court recently. Right now, Frenship sits at 6-1 in District 2-6A play after defeating Odessa Permian last Friday and Odessa High on Tuesday.

Last Friday evening, the Frenship Tigers took on the Odessa Permian Panthers at the Tiger Pit.

Frenship Volleyball Head Coach Toree Winchell said her team swept the Panthers in three sets, but had to fight for the win.

“Permian was a good match up for us,” Winchell said. “Even though we swept them in three, there were some really long, hard-fought rallies. In the 3rd set, we dug ourselves into a bit of a hole when we were down 16-20, and we had to fight and work our way back in the game, eventually pulling out the 27-25 win. It was good to see them finish in that manner.”

Winchell said that her juniors were the heroes against the Panthers.

“Junior Hope Rivera put up 28 assists and 4 aces,” Winchell said. “Junior Hannah Lockett had 16 assists and an ace of her own.”

On Tuesday Frenship took on Odessa High at home. The Tigers made light work of the Lady Bronchos to stay right behind District 2-6A leader Midland Legacy.

“The girls did a great job of coming out and taking care of business in a high level, controlled manner,” Winchell said. “We were able to work on our offense and put some good things into play.”

Andrea Laughlin led the team with eight kills followed closely by Devyn Nairn with seven. Maddie Brouillette backed them up with an impressive 10 digs and offensively with six aces on the night.

Up next for the Tigers is an undefeated Midland Legacy team who gave Frneship their only loss in district play so far.

“We are just working to put in quality work on and off the court,” Winchell said. “The girls know that this a big game to set us up for the rest of the second round, and we are looking forward to the chance to play them again.”