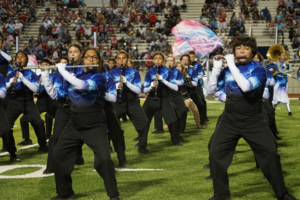 The Frenship High School Band qualified for the UIL State Marching Band Championships for the second year in a row.

Countless hours of practice and hard work have paid off for the Frenship High School Band. The Tiger Band is headed to the UIL State March Band Championships for the second year in a row.

The band will perform their show “The Lightning Field” on Monday, November 7 at 12:30 p.m. The performance will be at 12:30 p.m. and can be streamed on the National Association of State High School Associations (NFHS) Network.

Frenship ISD Director of Bands, Dr. Ryan Smith shared, “'The Lightning Field’ based on an immersive land art installation by the American sculptor, Walter De Maria, located in a remote area of the high desert of western New Mexico. You will see this installation represented in our show with lightning rods placed on the football field. Our exciting music selections include, “Mother of All Sources” by Tangerine Dream, “The Lightning Strike” by Snow Patrol, “Eleven” by yMusic, “Thunderclouds” by Sia, and “Ride the Lightning” by Metallica.”

The preparation for the state competition began before the end of the previous school year when the theme and music were selected. Students were sent home with the music to begin practicing over the summer and the band began practicing together at the beginning of August.

“We’ve been going with music and drills since August 1,” said Dr. Smith.

The journey to State began at the UIL Region Marching Contest, where the band was awarded a Division 1 by all judges, allowing them to progress to the UIL 6A Area Marching Contest. At Area, the top-scoring bands win the opportunity to compete at State, and Frenship came in second out of fifteen bands. In Frenship’s area, only the top three bands won the chance to compete at State.

“We’ve got a really great band and they’ve been working really hard this year to get ready for this State contest,” said Dr. Smith.

To see the show live before the state competition, be sure to come to the Frenship Football game at Peoples Bank Stadium on November 4. The band will be performing their full show at halftime. Tickets to the game can be purchased here.

The band will be leaving for San Antonio at 9:00 a.m. from Frenship High School The public is invited to wish them good luck at State by lining Dowden Avenue from Donald Preston Dr to Brownfield highway to cheer for them as they get on the road.