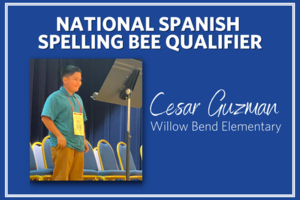 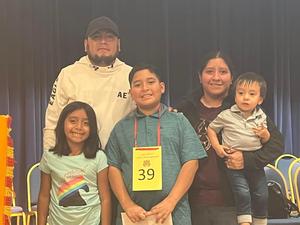 For a fourth consecutive year, a Frenship ISD student is headed to the National Spanish Spelling Bee.
Over the weekend, Willow Bend Elementary fifth-grader Cesar Guzman clinched first-place in the area contest, securing his spot at the national competition this summer.
On November 5, dozens of elementary and middle school students across the South Plains competed in the 12th Annual Lubbock Spanish Spelling Bee Championship hosted by Texas Tech University’s Sigma Delta Pi, a collegiate Hispanic Honor Society.
After several intense rounds, Guzman, an elementary student, beat out his older middle school counterparts and was named the area champion.
“This is the fifth year a Frenship dual language student has made it to nationals. This speaks highly of the type of bilingual program Frenship has implemented and the rigorous instruction provided by our teachers,” said Frenship ISD’s Bilingual and ESL Coordinator Senon Cruz.
Cruz says this success is a result of a lot of practice by the students and teachers along with strong relationships built throughout the process.
“Not only am I very proud of Cesar’s hard work and dedication, but also his coach and teacher Robert Nunez and the relationships he establishes with the students and families,” said Cruz. “It goes beyond students studying and knowing how to spell the words. Mr. Nunez builds connections with his students and their families.”
Over the next several months, Guzman and Nunez will continue to practice and study to go head-to-head against students from across the nation this summer.
Published November 10, 2022