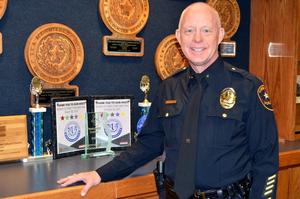 The FISD Board of Trustees unanimously accepted the recommendation of Roy Bassett, a 32-year law enforcement veteran with the Lubbock Police Department, as the district’s new chief of police.

The Frenship ISD Board of Trustees unanimously accepted the recommendation of Roy Bassett, a 32-year law enforcement veteran with the Lubbock Police Department, as the district’s new chief of police.

Bassett served in numerous capacities during his time with LPD, most recently as Deputy Chief. His service also includes a 10-year period as a detective in juvenile crimes along with time as a Sergeant in Patrol and Administration as well as the department’s Public Information Officer.

“I’ve seen Frenship ISD grow and be continually recognized for excellence, and the Frenship Police Department has been an integral part of that growth and excellence,” Bassett said. “I’ve had a long, rewarding career with the Lubbock Police Department with a wide variety of assignments and training that have given me a broad spectrum of experience. I am excited to bring my experience and perspective alongside the expert officers already here to make this department and district even better.”

After receiving his bachelor’s from Texas Tech University, Bassett earned the title of Certified Peace Officer from the Lubbock Police Academy in 1987 and received the Master Peace Officer certificate in July 2000.

“We are delighted Chief Bassett is joining the Frenship team,” Dr. McCord said. “He is a highly decorated officer with proven leadership abilities. He’s been a great ambassador for the Lubbock Police Department and will do the same for Frenship.

“I look forward to serving alongside Chief Bassett to provide a safe and premier learning environment to equip every student for the endless opportunities the future holds for each child.”

Bassett is set to begin his new role in January.